It's a Small World After All

As an amateur photographer and erstwhile biologist, I swoon over the winning images in Nikon's annual Small World Photomicrography Competition. The 2013 winners were just announced. This year's top shot is of Chaetoceros debilis, a chain-forming marine diatom. Love it! Check out those spines. Chaetoceros diatoms are my favorite type of phytoplankton.


What, you mean you don't have a favorite phytoplankter? Really? I'm not sure we can be friends anymore.

Here's a photo I took of a Chaetoceros chain during my graduate research. This was taken at 40X magnification (400 times larger than life size) under ultraviolet light. The four large bright dots are the nuclei of the individual cells in the chain. The smaller specks throughout the image are primarily bacteria.

Last month, I made the sweet cherry and almond galette from the Smitten Kitchen cookbook. It looked like the crime scene of a grisly cherry mass murder but tasted like heavenly choirs of angels (metaphorically speaking, as I have never tasted singing angels).

I continued the cherry binge last week with a clafoutis from Joy of Cooking. Fail. The top collapsed, the bottom was spongy, the cherries mushy, the batter bland. My heart goes out to those poor cherries, which suffered such a terrible culinary fate.

Thankfully, my other recent cherry kitchen experiment was an all-around success. Amaury and I made a guignolet kirsch—that's GEE-nyo-lay KEERSH, hard 'g', for you non-francophones—in July and have been happily sipping the results ever since. 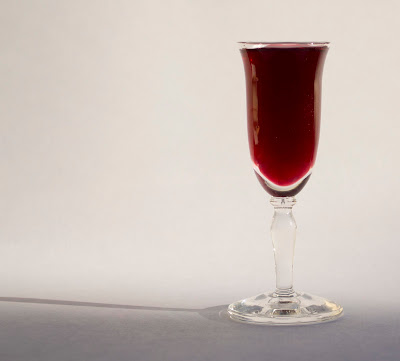 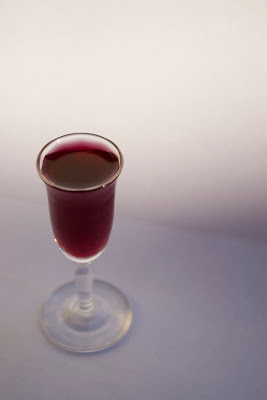 The recipe is pretty simple but does involve a modicum of patience, as the flavors need to schmooze for a few days to properly develop. The end product is a sweet, lusciously smooth drink best poured cold into small glasses.

One of the ingredients in a guignolet kirsch is, unsurprisingly, kirsch (also called kirschwasser). This cherry brandy doesn't run cheap, so you could try leaving it out if your pocketbook can't stretch that far; sweet cherry-infused red wine should be pretty tasty on its own. Cookbook author extraordinaire David Lebovitz calls kirsch one of his essential baking ingredients, though, so maybe it's worth the splurge. You decide.

The original recipe called for the cherries to be pitted beforehand, but we left them in. Cherry pits impart a subtle almond flavor. They also contain, as you may have heard, cyanide. OH NOES! Poison, right?

Actually, cyanide is found naturally in a number of foods, including almonds, stone fruit pits (including cherries, peaches, apricots, and plums), cassava, soybeans, spinach, lima beans, sweet potatoes, sugarcane, bamboo shoots, and grains like sorghum, maize, and millet. Your body quickly metabolizes cyanide into thiocyanate, which is then excreted in your urine. So calm down. Unless you subsist entirely on these foods, you should be safe. Eat a balanced diet and all that. And don't smoke. Cyanide is one of the many, many toxic components of cigarette smoke.

Some plants and animals use cyanide compounds to defend themselves. Witness the yellow-spotted millipede (Harpaphe haydeniana), which secretes hydrogen cyanide when threatened. To humans, the gas is mostly harmless and smells a bit like almonds, but it can kill insects and small mammals.

Guignolet kirsch recipe behind the cut...
Read more »
at 6:27 PM No comments: